Paying rent in Sydney is painful. An average room costs $289 a week, and that’s for something very average. A nice room is usually $350, with the costs of bond and bills leaving many renters skint. And when people are skint, there’s always someone else happy to exploit them.

Right now, in the sadder corners of Craigslist and Locanto, there’s a whole cohort of men offering rooms at reduced rates, or free. The catch? Their tenants pay with sex. And while some of the ads are upfront about their sexual expectations, others hide behind ambiguous terms such as “personal favours,” “sensual massages,” and offers to “share a bed.”

Basically, it doesn’t take a philosophy lecturer to recognise that landlords are abusing their power to exploit women in need. Sex for rent—when the tenant has few other choices in Sydney’s overheated rental market—just funnels vulnerable people into sex work. The power balance is entirely skewed in favour of the landlord, who has the ability to throw his tenant onto the street if she doesn’t submit to his bidding.

So, after reading through some of these ads, I became curious about the characters posting them. Who were these sleazebags? And how did they justify propagating such woefully asymmetrical power imbalances?

So to find out, I posted my own “room wanted” advert online. Here it is: 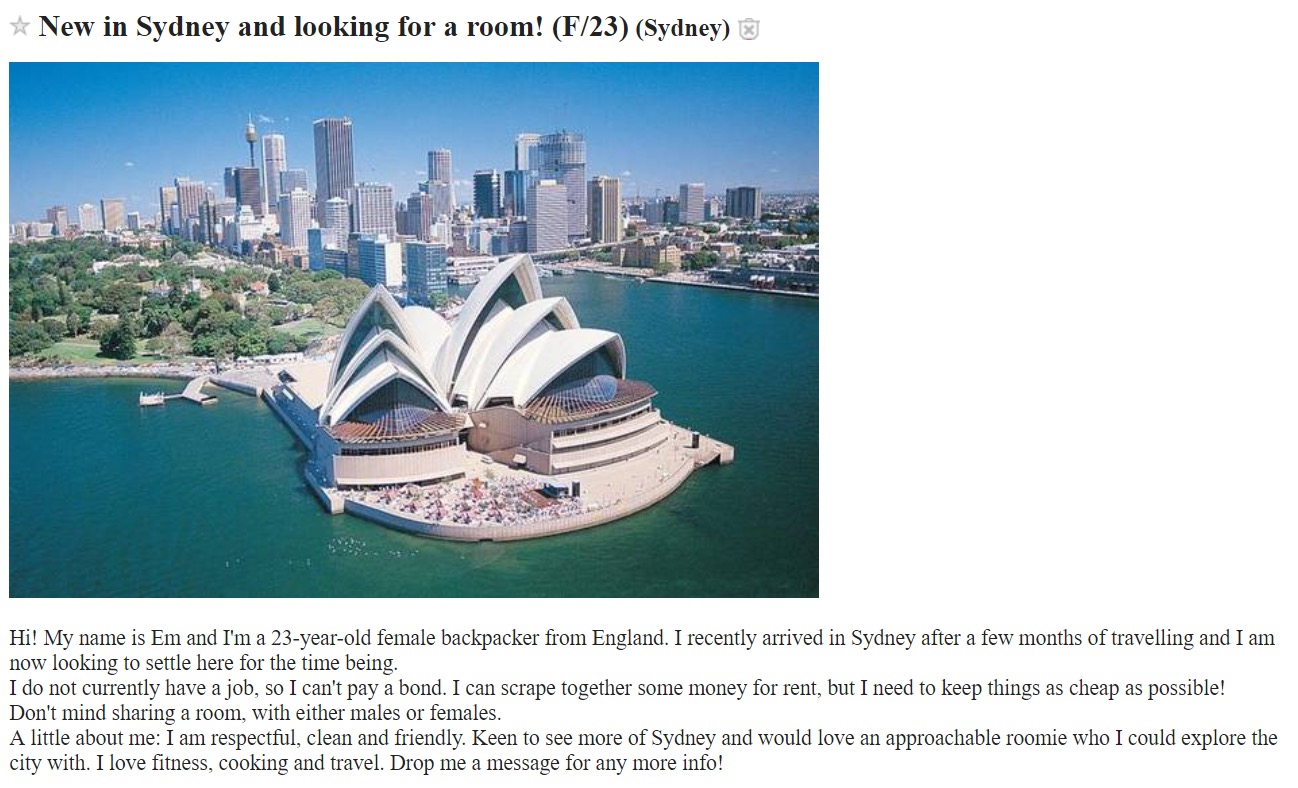 I called myself Em, and claimed to be a backpacker with little more than a handful of possessions and little in the bank. Between sofa surfing and earning a pittance distributing promotional flyers on the street, my avatar on Gumtree, Craigslist and Locanto struggled to get by in one of the world’s most expensive cities, and just wanted a simple room. And I didn’t mention anything about sex, but apparently I didn’t need to. Within a day sleazy offers were flying in.

Of the 60 total responses, 14 of them proposed free or cheap rent in return for sexual favours. Another three respondents didn’t have a room to rent, but just offered straight-up sex for money.

More positively, a total of 27 responses seemed to come from regular, above-board people who had a room to lease for cash, or services such as animal care or cleaning. Then a final 16 of the respondents were difficult to categorise. Some of them offered suspiciously low rent and suggested that we meet before disclosing further information. Then when I pressed for details, a lot of those people just ghosted. So I couldn’t confidently say whether they were people who actually owned cheap rooms, or they were just looking for sex.

The 14 people who offered me sex for rent were diverse bunch, aged between 25 and 54. The group included a 27-year-old professional kick boxer, a 52-year-old self-employed business owner and a 43-year-old divorcee who told me he never got around to finding a housemate after his wife left.

One of the first respondents was Miguel,* who wanted $220 per week for a room in his St Mary’s property. Over an email exchange, he laid out the options.

He wanted either $22.50 a week in rent, subsidised by a number of 30 to 40-minute sessions of sex, or $50 for oral. In the past, Miguel told me that he’d housed another woman with the same deal. He said that he’s met the woman on a number of occasions before she moved in, and he believed there was “mutual attraction” between the two. As he explained, “I think she quite liked me, but no actual relationship developed as she had a boyfriend.”

I decided to google Miguel and discovered he’d put a lot of effort into finding a tenant. A search of his email address led me to another advert for a female flatmate. This one was for female international student who would receive discount rent for weekly massages. A reverse image search of Miguel’s sad, barren room that he’d featured in his post brought me to more listings on Gumtree, which had since been deleted.

When I asked for his moral stance on sex for shelter, he shrugged it off. “If both people are happy, there is nothing wrong with it. We are both consenting adults. Sure, I might get sex twice a week, but so would you,” he wrote. “Hard as it may be to believe, you might actually enjoy it, and you would be getting free rent.”

While Miguel acknowledged that accepting sex as payment essentially would involve him housing a live-in sex worker, he was adamant that sex for rent arrangements could be consensual.

“There are also THOUSANDS of women who work as escorts and most do it willingly,” read one of his animated emails. “Unfortunately, there may be a few who are forced to do it, or feel they have no other choice, but the vast majority do it by choice.”

He rejected the idea he’d be coercing a vulnerable woman into sex work. Miguel claimed to only be interested in women who were “choosing” to pay their way with sexual favours.

“Did I mention this would benefit you more than me? Trust me, I am better off with $200 in my pocket each week,” he wrote. “If you think I want to deal with someone who really has no other option, you are seriously mistaken. Someone like that would be desperate and possibly dangerous. I have no desire to be robbed, thank you very much. If you think I am going to put myself or property in danger, think again.”

Defending his moral standpoint appeared to agitate Miguel, who curtly ended our communications with a final message. “Don’t bother replying, your emails will be deleted.”

While you’re here, check out our VICE documentary series “In Bloom,” which explores consent, sex, and relationships:

Meanwhile, 26-year-old security guard Pete said he would share his master bedroom in Enfield for free until I found a job, just so long as I agreed to regular sex. He told me that sleeping in his bed was better than being on the street. “I think being on the streets is a worse situation. I’ve seen some shit happen to homeless people. It’s not nice what goes on.” Then he added, “Compared to what else is going on in the world, yeah, this is ethical.”

Ed, a 32-year-old businessman from Western Sydney, made another offer for sex for rent until I could pay with money. Unlike several of the other landlords, Ed openly admitted the exchange was “not even close to ethical, but I’m doing it anyway.”

Reading through the responses, it struck me that all the men wanted to think of themselves as Em’s savior. Many referred to themselves as “nice” or “decent” guys. The notion that they were “helping out” appeared repeatedly throughout our exchanges. But when I probed for their moral justification, several either shut me down with blunt responses or just stopped replying altogether.

Here’s the thing: not one of them was “helping out.” As CEO of Women’s Community Shelters Annabelle Daniel later explained, women who find themselves in a sex-for-rent bargain often feel they have no other choice. The women she has seen entering those exchanges include students struggling to juggle employment, older women who’ve fallen victim to age discrimination in the workplace, or migrant women who have no support system.

Presently, New South Wales has no plans to increase the availability of affordable housing, despite local councils calling for more affordable housing projects, and Annabelle fears things are only getting worse.

“What kind of a society is created when we’re lacking in affordable homes for all members of society, be they partnered or single, women or men, carers, or without family?” she asked. “Because without a doubt, as safe and secure housing moves out of reach for single women, we will only see more of these [sex-for-rent] examples cropping up.”

Read the original article on Vice.com